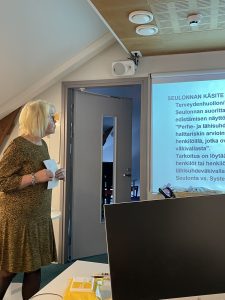 Sirkka Perttu/VoiVa coop told about the SAVE project and the planned screening measures of domestic violence against older people. Experts from the Human Rights Centre (HRC) and the Finnish institute for health and welfare (THL) participated in the event.

The Human Rights Centre (HRC) is administratively connected to the Office of the Parliamentary Ombudsman. Finnish institute for health and welfare (THL) is a research and development institute under the Ministry of Social Affairs and Health. They gave a broad perspective to screening in their presentations and expressed their views on screening of elder abuse.

An expert in law, Sanna Ahola, at the Human Rights Centre, explained the key human rights conventions and how they relate to violence against the older persons. Age is not mentioned in all conventions, but it is prohibited as a ground for discrimination, for example in the European Social Charter and the Istanbul Convention.

Martta October, Development Manager at the National Institute for Health and Welfare (THL), discussed the prevalence of domestic violence and intimate partner violence in the adult population (Statistics Finland 2021), the development of key legislation in the 2010s, the current state of coordination structures, and the identification of intimate partner violence in health care.

Experts from the Finnish institute for health and welfare gave input to screening measures: data collection should be systematic, meaning a sample of defined target group (e.g. according defined age groups, risk groups), within a certain period of time. That kind of knowledge could be useful for justification of violence prevention actions, such as screening, in elderly care. Screening should be also a complete programme, starting from asking/using screening tool and ending results/outcomes (data collection of follow-up) and their assessment for future developments. The participants also discussed how to collect follow-up data of screening from the organizations the confirmed positive cases are referred.